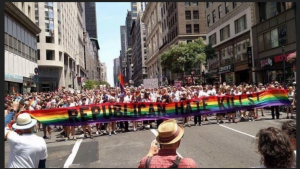 As HypeLine reports, “a large group from the LGBT community led part of the parade with a banner reading ‘Republican Hate Kills’ in the wake of the Orlando night club shooting.” The mainstream and LGBT media chose to ignore this in their coverage despite the image being widely circulated on the twitterverse. But it seems Gays Against Guns was the group behind the banner.

[Direct action group Queer Nation, a dominant player on the city’s activist scene, says it was “honored to join Gays Against Guns” in the Pride march, and that “Gilbert Baker supplied the vibrant banners reading ‘Gays Against Guns’ and ‘Republican Hate Kills.’” Baker is credited as the creator of the Rainbow Flag and a member of Queer Nation. Blogger joemygod further describes Baker as “a major force with Queer Nation here in New York City.”]

A few inconvenient truths: the mass murder in Orlando was committed by a radicalized Muslim jihadist who was also a registered Democrat, and who told friends he was supporting Hillary Clinton? No matter, if the big lie serves the narrative, then it’s all good, right?

If I were a gay Republican who showed up to march, I may have just left.

Hillary Clinton marched for a few highly publicized blocks then departed. That’s fine, But the progressives who organize Pride and run the LGBT political movement have made it crystal clear that Republicans are not welcome.

That’s the message being sent to the growing number of younger Republicans and conservatives who are, like their generational cohort, gay friendly. As I’ve often said, the worst nightmare of LGBT progressives is a GOP that ceases to be anti-gay, and they’ll do whatever it takes to stop that from happening.

LGBT progressives’ modus operandi is to go all out to defeat pro-gay and openly gay Republicans, with any lies at their disposal, as they did when San Diego’s Carol DeMaio ran for mayor in 2012, about which James Kirchcik noted:

…a group deceptively named “Conservatives for Gay Rights Supporting Carl DeMaio for Mayor 2012”—paid for “push poll” robocalls in which DeMaio’s homosexuality was put front and center. The group also paid for pamphlets featuring pictures of DeMaio hugging another man and standing alongside a drag queen, stating, “We conservatives know that liberty means that someone can pick a partner of their choice. We commend Carl on his conservative policies and exercising his liberties.”

Not until after the election—ultimately won by former Democratic Congressman Bob Filner, who resigned last August facing multiple accusations of sexual harassment—was it revealed that Democratic supporters of Filner had funded the shadowy group.

During the campaign, DeMaio, then a San Diego city council member, was greeted with boos while marching in the city’s gay pride celebration with his partner—a common occurrence for GOP candidates and officeholders who attend pride events that aren’t organized and hosted by gay Republicans.

And even worse were the now-verified slanders against DeMaio when he ran for Congress in 2014, which a court found “definitely played a role” in DeMaio’s defeat.

Meanwhile, South Carolina has elected its first openly gay legislator, a Republican who says the party in his conservative, southern state is growing more inclusive.

Oh, the pain that this must be causing LGBT progressives.

Furthermore. An example of inclusive pride. An email I received says, “Join the DC Log Cabin Republicans for our end of Pride Month Social. … We encourage our members and supporters to bring friends to this event—conservative or liberal, Republican or Democrat, gay,straight, transgendered, or bi—because tonight we celebrate LGBT PRIDE and how together we make advancements for our community as a whole.”

Imagine if they had, instead, said “Democrat Hate Kills.”

Parting observation. No, the fact that QN and the march organizers who gave it prominence framed their “Republican Hate Kills” message, if you did some digging into background, as a critique of those who defend Second Amendment rights is a rather thin reed to legitimatize the banner. Despite the pretext, the message came through loud and clear, and it was received as intended.

On the matter of guns, Scott Adams has a pertinent observation on Why Gun Control Can’t Be Solved in the USA:

On average, Democrats (that’s my team) use guns for shooting the innocent. We call that crime. On average, Republicans use guns for sporting purposes and self-defense. … So it seems to me that gun control can’t be solved because Democrats are using guns to kill each other – and want it to stop – whereas Republicans are using guns to defend against Democrats. Psychologically, those are different risk profiles.

Indeed. And check out David Kopel’s The history of LGBT gun-rights litigation, on “the past and present of gay rights activism for the Second Amendment rights of sexual minorities and of all other Americans.”

Obviously, people of good faith can disagree about gun rights, but if you think opposing restrictive gun control is “hate,” then look in the mirror to see the real hater.

IGF CultureWatch is a blog that originated with the Independent Gay Forum, a group of writers and activists who focused on advancing gay and lesbian legal equality and social inclusion beyond ideological rigidity and leftwing orthodoxy. more

The Victims' Revolution: The Rise of Identity Studies and the Closing of the Liberal Mind
by Bruce Bawer
How identity-based college courses and disciplines resulted in an impoverishment of thought.

Kindly Inquisitors: The New Attacks on Free Thought, Expanded Edition
by Jonathan Rauch
Why “we must allow people to err, even where the error offends and upsets, as it often will.”

Beyond Queer: Challenging Gay Left Orthodoxy
edited by Bruce Bawer
A classic anthology with essays by many of IGF's founders.